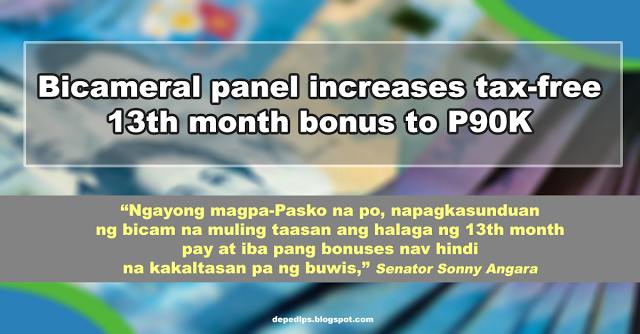 Members of the bicameral conference committee on the Tax Reform for Acceleration and Inclusion (TRAIN) bill have agreed to increase the tax-free cap of 13th month pay and other bonuses to P90,000 starting 2018.

Under the prevailing Republic Act 10653, employees’ 13th month pay and other benefits, including productivity incentives and Christmas bonuses, are exempted from tax only if they do not exceed P82,000.

As compromise, members of the bicameral, who are tasked to reconcile the differences of the two versions, have agreed on Wednesday to raise the tax-exempt ceiling to P90,000 effective January 2018.

The original proposal from the Department of Finance sought to scrap the 13th month pay tax exemption and to make it part of the all-inclusive P250,000 income tax exemption.

Citing the law, Angara said the 13th month pay should be given to private sector employees not later than December 24. It must be equivalent to one-twelfth (1/12) of the basic salary of an employee within a calendar year.

The senator reminded employers that they must pay their rank-and-file employees a 13th month pay regardless of the nature of their employment and whatever the method their wages are paid, provided they worked for at least one month during a calendar year.

Important things both Private and Gov’t Employees Must Know