DBM: Education has the highest allocation of the proposed 2019 Budget 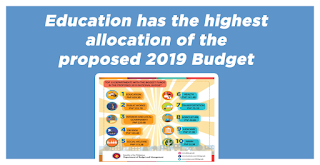 The proposed 2019 budget, the third budget of the Duterte Administration, is set to be submitted to Congress onJuly 23, the day President Rodrigo R. Duterte delivers his third State of the Nation Address (SONA). The P 3.757 trillion national budget will be the first cash-based budget of the government, reflecting the urgent need to speed up public service delivery to the people.

The spending priorities in the President’s Budget for 2019 remain to be public infrastructure and human capital development. Higher investments on infrastructure will support economic growth, targeted to reach 7% to 8% in 2019, create jobs, and spur opportunities in the countryside. Spending for human capital, such as education, healthcare, and social protection, will mold the country’s young population into a world-class and competent workforce capable of sustaining the Philippine’s growth momentum.

“We are sticking to our plan of focusing on Build Build Build and social services,” said Budget and Management Secretary Benjamin E. Diokno. “These are the priorities we identified as early as the beginning of our term, and we will see to it that investments on these sectors are sustained,” he added.

The sector with the highest allocation is education, comprised of the budgets of the Department of Education (DepEd), State Universities and Colleges (SUCs), the Commission on Higher Education (CHED), and the Technical Education and Skills Development Authority (TESDA). Its cash-appropriations in the proposed 2019 budget amounts to P659.3 billion, higher by P72.2 billion or 12.3% than its cash-based equivalent in the 2018 budget.

Interior and Local Government (DILG) comes in third, with an allocation of P225.6 billion, higher by P53.3 billion or 30.9%. The bigger allocation will strengthen local governance, and support the public safety initiatives of the government.

This is followed by Defense (DND) with a budget of P183.4 billion, an increase of P46.9 billion or 34.4%. Such an amount will bolster security and promote peace and order in the country.

Social Welfare, composed of the budget of the Department of Social Welfare and Development (DSWD) and the budget for Unconditional Cash Transfers under the Land Bank of the Philippines (LBP), is fifth with an allocation of P173.3 billion, higher by P8.9 billion or 5.4%. Funding for social welfare will support the poverty-reduction efforts and social protection programs of the government.

Health, which combines the budget of the Department of Health (DOH) and the Philippine Health Insurance Corporation (PHIC), has an allocation of P141.4 billion. The said budget will enable the government to provide affordable and accessible healthcare to Filipinos. The said budget is 8.9% lower than last year’s allocation due to a significant cut in the Health Facilities Enhancement Program (HFEP), to give way to fast-moving and implementation-ready projects given the cash-based budgeting system the DBM is implementing.

Transportation (DOTr) has the seventh-highest allocation, with a budget of P76.1 billion, increasing by P35.9 billion or 89.3%. It will address the need for efficient and comfortable mass transport systems all over the country, easing the lives of Filipino commuters.

Rounding out the top 10 are the Agriculture Department (DA), the Judiciary, and the Autonomous Region in Muslim Mindanao (ARMM).

The DA has a budget of P49.8 billion, higher by P9.1 billion or 22.4%, to promote agricultural development and improve the lives of those in the rural sector.

Meanwhile, the Judiciary has a budget of P37.3 billion. This represents a P1.9 billion or 5.4% increase for the swift and fair administration of justice.

Lastly, the ARMM is allocated P32.3 billion, P7.9 billion or 32.4% higher than last year. It will support the livelihood, peace and order, and rural development projects in the region.

“The President’s Budget for 2019 will continue to provide the largest allocations to the priority development initiatives of the government,” said the Budget Secretary. “We have not only increased the budgetary allocations of agencies, but also implemented reforms to speed up the delivery of essential public goods and services to our citizens,” Secretary Diokno concluded. 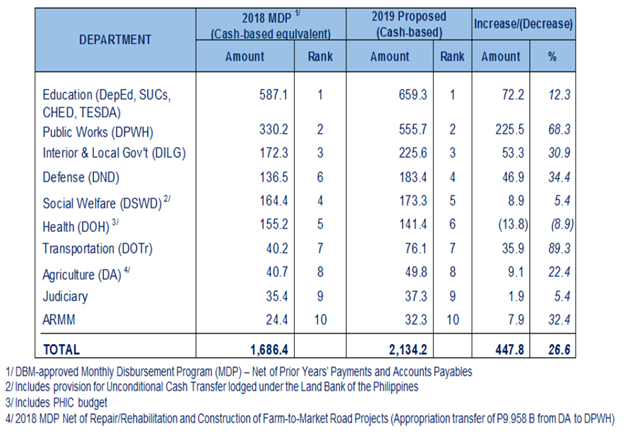