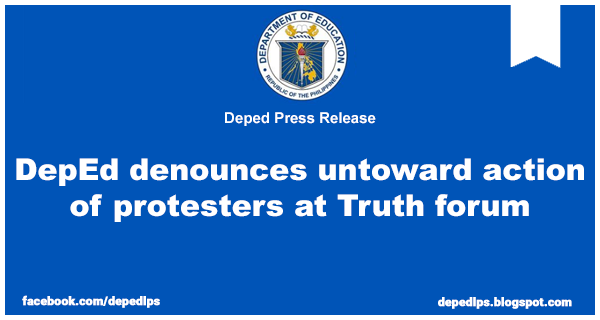 The Department of Education (DepEd) denounces the action of protesters bearing placards of Save Our Schools (SOS) during the Truth forum of Rappler on November 28. Shouting at the Secretary, ironically insisting on a one-way noise barrage instead of a diplomatic discourse called “dialogue,” resorting to blame game and dramatics revealed the kind of group that they are – a stark contrast to the culture and values of the indigenous peoples (IP) they claim to represent.

The Department, through its Regional and Division offices, is relentless in its consultation and coordination with IP schools to enable them to properly comply with the requirements under DepEd Order No. 21, s. 2014 (Guidelines on the Recognition of Private Learning Institutions Serving Indigenous Peoples Learners).

In fact, DepEd Region 12 recently met with teachers and coordinators of Center for Lumad Advocacy and Networking, Inc. (CLANS) to provide them with technical assistance in their application for permit to operate. In the Davao Region, all private IP schools that applied have been given temporary permits and are also being assisted by DepEd. The dialogue being sought by SOS is already being done at the local level, with or without their prompting, and will be expanded to other areas in the country implementing the IP Education (IPEd) Program.

If claims that “schools” serving IP learners in Mindanao are being bombed “daily” by the military, why did reports of local government units (LGUs) and Schools Division Offices (SDOs), upon our verification, reveal otherwise? Moreover, the Department does not allow armed presence within and near the premises of its schools and has received the commitment of the military to maintain schools as zones of peace.

For a group that pushes for the rights of indigenous peoples seeking respect for their culture and peaceful co-existence through education, name-calling and discourtesy toward an elder (revered with the use of “Apo”) as exhibited by these protesters are nowhere near the nature and culture by which genuine IPs are raised.

The Department always encourages learners to think critically and question information handed to them, but we also encourage them to always do so at the proper forum – where a healthy exchange of ideas and opinions thrives and flourishes into meaningful decisions and actions. Students and teachers who have witnessed the spectacle and have understood the necessity of adhering to the truth warmly received the Secretary with applause and embrace after the incident.

The IPEd Program is DepEd’s response to the right of indigenous peoples to basic education that is responsive to their context, respects their identities, and promotes their indigenous knowledge, skills, and other aspects of their cultural heritage. Specifically, it aims to: 1) make the curriculum culturally responsive to the specific community context of IP learners; 2) build the capacity of teachers, school heads, and other concerned personnel at different levels of governance in implementing culture-based education for IP learners; 3) support the development of culturally appropriate learning resources and environment responsive to the specific community context of IP learners; 4) strengthen the policy environment supportive of IPEd; and 5) address the learning needs of IP learners who lack access to basic education services.

The establishment of private learning institutions serving IP learners by non-government groups is not tantamount to DepEd’s lack of initiatives for young and adult IP learners. In fact, data of School Year 2016-2017 show that there are 2,929,456 IP learners enrolled in 33,633 public schools all over the country.

Important things both Private and Gov’t Employees Must Know