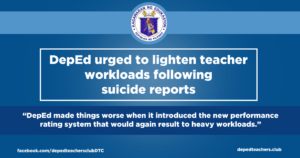 A group pushing for teachers’ rights and welfare has called on the Department of Education (DepEd) to act on the reported suicide of teachers allegedly attributed to heavy workload.

“Two cases of suicide in just two months purportedly due to work-related issues should alarm the DepEd and take necessary steps. We have been raising the issue of overburden due to clerical tasks required to teachers,” TDC Chair Benjo Basas said.

The group issued the statement after a newly hired teacher from La Paz, Leyte hanged herself last July.

A week ago, the group said another teacher from Bacoor City was found dead inside her room still wearing her school uniform.

According to Basas, “DepEd made things worse when it introduced the new performance rating system that would again result to heavy workloads.”

“We appeal to Sec. Briones to put a halt on all of the required non-teaching related tasks, class observations and paper works and listen to us in a dialogue. Ilang guro pa ba ang kailangang magpakamatay (How many teachers need to die)?”

The group added its demand for a comprehensive health care program for teachers as mandated by the Magna Carta for Teachers as early as 1966. TDC said the health program should cover mental wellness as well.

Teachers to get P500 Medical Examination Allowance by 2019