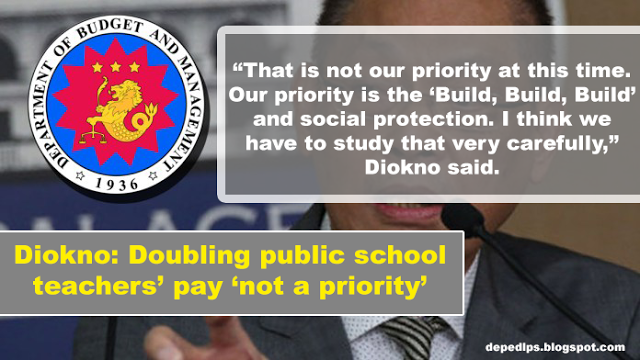 Despite the President’s promise to double the pay of public school teachers, Budget Secretary Benjamin Diokno said Wednesday it would take a backseat to more pressing programs needed to be funded, including the ambitious “Build, Build, Build” infrastructure rollout.

Diokno said in a press conference that for the 600,000 public school teachers, the government may have to shell out half a trillion pesos if plans to double their salaries push through.

“That is not our priority at this time. Our priority is the ‘Build, Build, Build’ and social protection. I think we have to study that very carefully,” Diokno said.

Under “Build, Build, Build,” the government plans to roll out 75 flagship, “game-changing” projects, with about half targeted to be finished within President Duterte’s term, alongside spending a total of up to P9 trillion on hard and modern infrastructure until 2022 to usher in “the golden age of infrastructure.”

Diokno noted that the salaries of teachers in public schools now fare better than those in private schools, hence the exodus of educators from the latter to the former.

Diokno also pointed out that public school teachers’ salaries would still go up next year under Executive Order No. 201, which was issued by former President Benigno Aquino III before he left office in 2016.

Under EO 201, civilian government personnel would enjoy four tranches of salary increases until 2019.

Diokno said public school teachers’ salaries already rose by about 15-16 percent so far, following the implementation of the third tranche of pay hike this year.

According to Diokno, the Department of Budget and Management plans to tap a private firm to study the competitiveness of the government’s pay scheme before 2020 or at the end of the four-year salary adjustment program.

The Budget chief said he would talk to President Duterte about the matter.

According to Roque, the increase in teachers’ salaries would supposedly be funded through the administration’s second tax reform package.

However, the second tax reform package is expected to be revenue-neutral, which means the tax payments it would generate will be offset by foregone revenues.

A Department of Finance document last year showed that the second of five tax reform packages would mainly be based on the results of the cost-benefit analysis of investors’ tax perks under the Tax Incentives Management and Transparency Act (Timta).

A comprehensive review of the country’s tax incentives regime had been mandated under the Timta Law to give an overview of the benefits as well as the costs of giving away fiscal perks to investors.

The second tax reform package would bring down the corporate income tax rate from 30 percent at present to 28 percent in 2019 and 25 percent in 2021, similar to the rates in neighboring countries.

Fiscal incentives would be rationalized under the second package such that only those that were performance-based, targeted, time-bound and transparent shall be granted to investors.

As for existing tax incentives, a sunset provision of a maximum of five years would be put in place.

Also, the government would replace the 5-percent gross income earned tax to a reduced corporate income tax rate of 15 percent under the second tax package.

The second package would also “expand the coverage of the Fiscal Incentives Review Board to include all incentive recipients beyond government-owned and/or -controlled corporations” while also reviewing the tax incentives being given away by investment promotion agencies such as the Board of Investments, the Philippine Economic Zone Authority as well as other economic zones, the DOF document showed.

Based on DOF estimates, the P34.8 billion in foregone revenues from the reduced corporate income tax rates would be offset by a similar P34.8-billion gain from the rationalization of fiscal incentives during the first year of implementation.

“The lower income tax rate must be offset by enough claw back of incentives,” hence revenue-neutral,” the DOF had explained.