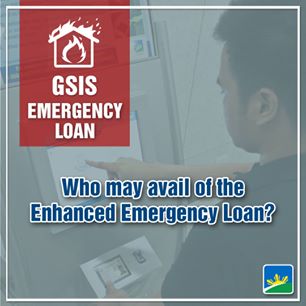 GSIS members working or residing as well as old-age pensioners in the following areas, declared under a state of calamity may avail of the emergency loan during the period listed hereunder:

Due to Typhoon “Odette”

Flashfloods due to Storm Surge

Heavy Rainfall due to Typhoon ‘Paolo’