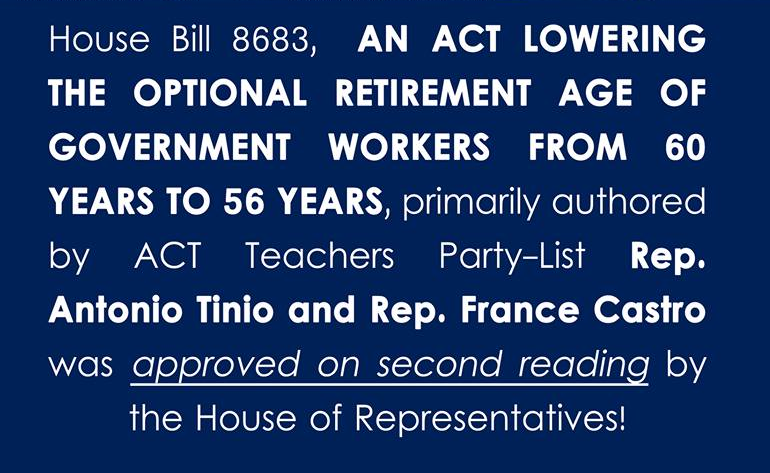 JUST IN: House Bill 8683, An Act Lowering the Optional Retirement Age of Government Workers from 60 Years to 56 Years, primarily authored by ACT Teachers Party-List Rep. Antonio Tinio and Rep. France Castro was approved on second reading by the House of Representatives!

REP. TINIO: These civil servants dedicate twenty, thirty years of their lives in the service of the nation. It is high time that the government heed their clamor for the option to retire at an earlier age in order for them to enjoy their retirement benefits for as long as possible. Since the 16th Congress, we have been pushing for the enactment of the lowering of the optional retirement age of public school teachers.

REP. CASTRO: Public school teachers have consistently raised their demand to be given the choice to retire earlier during our formal and informal consultations nationwide. It is imperative that Congress listen to these government workers who have devoted their lives to honing the minds and nurturing the hearts of our youth, in spite of receiving meager salaries, working in underfunded schools and doing additional, usually unpaid, miscellaneous tasks.

Solons warn Congress on another postponement of the barangay and SK...