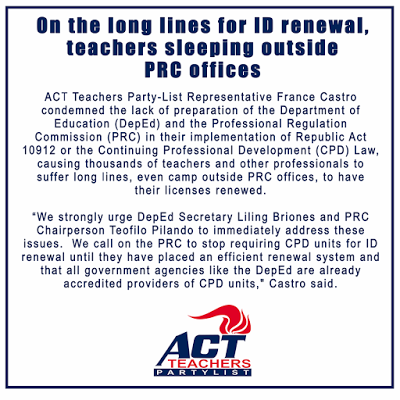 ACT Teachers Party-List Representative France Castro condemned the lack of preparation of the Department of Education (DepEd) and the Professional Regulation Commission (PRC) in their implementation of Republic Act 10912 or the Continuing Professional Development (CPD) Law, causing thousands of teachers and other professionals to suffer long lines, even camp outside PRC offices, to have their licenses renewed.

In anticipation of the expiration of their PRC identification cards, professionals, most of them teachers, rushed to PRC offices nationwide. Castro’s office received reports from public school teachers that their requests for online appointment were denied, forcing them to go to the central or regional offices or service centers to complete their application. Teachers have reported long lines in the PRC central and regional offices, with some 200 teachers were even reported to have slept outside of the PRC office in Davao.

She noted that the PRC failed to put up a system that will accommodate thousands of applicants for renewal, adding that the PRC’s so-called “online appointment”, which they set as a prerequisite for all exam applications, registrations and renewals, is useless since the PRC’s website most often crashes or displays “For further verification” or “No record found” anyway.

“We continue to receive various complaints from teachers and other professionals from different provinces nationwide about the financial burden and the hardships they go through just to have their IDs renewed,” Castro stated. “Public school teachers from far-flung towns travel to the city center while most teachers and other professionals are forced to be absent from their work just to go to the PRC offices.”

Castro also reported that the DepEd Central Office and its regular programs such as the In-Service Training (INSET), seminars, and trainings have not yet been accredited with the PRC as CPD provider and credit-earning programs. “Because of this, the teachers and other professionals under DepEd are worried that they have to earn their credits through expensive seminars and trainings of private providers,” she said.

“The PRC should have seen to it that it has in place the necessary technical capability and sufficient number of personnel, offices, and service centers to accommodate the simultaneous application of thousands for license renewal. The DepEd, for its part, should have ensured that it has been accredited as CPD provider and that its programs are also accredited as credit-earning programs as well as free,” the solon pressed. “These agencies’ rush to implement the CPD Law without these preconditions led to unnecessary hardship, stress, and costs borne by teachers and other professionals.”

The lawmaker added that the Constitution mandates DepEd and the PRC to enhance the right of teachers to professional advancement and to promote sustained development of Filipino professionals in general.

“We had a series of dialogues both with the PRC and DepEd on the matter since October 2016. We stand by our position that these agencies should provide for accessible continuing professional development for our professionals especially those working in the government. Our professionals should not feel the need to earn their units in private CPD providers, which view CPD as a business opportunity, and teachers and professionals as milking cows,” Castro stressed. “Instead of focusing on accrediting private providers, the PRC should ensure that professionals like teachers, especially rank-and-file government employees, will get CPD units for free and with no additional burden.”

“We strongly urge DepEd Secretary Liling Briones and PRC Chairperson Teofilo Pilando to immediately address these issues. We call on the PRC to stop requiring CPD units for ID renewal until they have placed an efficient renewal system and that all government agencies like the DepEd are already accredited providers of CPD units,” the solon ended.