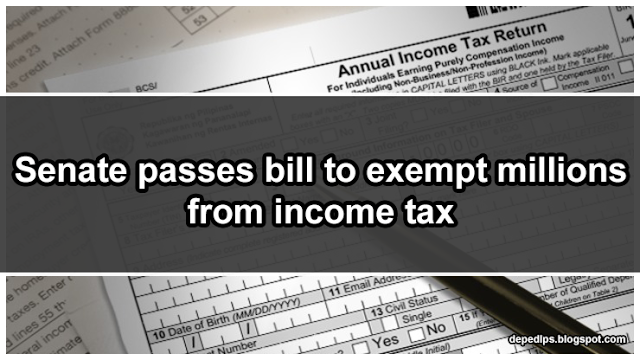 MANILA, Philippines — The Senate on Tuesday approved on third and final reading its version of the government’s tax reform package aimed at providing more tax relief to millions of Filipinos and funding the administration’s ambitious infrastructure projects.

“In the history of our country’s taxation, this is the biggest income tax relief that we can give to our workers,” Angara said.

“We’re putting more money in the pockets of Filipinos. We want a fair income tax system which has become inequitable over the years,” he added.

Under the Tax Reform for Acceleration and Inclusion Bill, the first P250,000 annual taxable income will be exempted from tax, plus the P82,000 tax exemption for 13th month pay and other bonuses. This translates into an approximate tax-free monthly income of P21,000.

Based on data from the Bureau of Internal Revenue, almost all or 99 percent of the estimated 7.5 million individual income taxpayers will enjoy lower income tax rates.

The proposed law will also triple to around 6.8 million the number of tax-exempt minimum wage earners, from the current 2 million.

Under the proposed tax scheme, a government educator with the rank of Teacher I with a monthly income of P20,179 will already be exempted from paying taxes and have a monthly savings of P2,393.

The proposed measure is aiming to impose additional taxes on fuel, some sugar-sweetened beverages (excluding milk and three-in-one coffee), automobiles and coal.

Small business with annual sales of P3 million or below are still exempted from paying the value-added tax while the VAT threshold was increased to P3 million.

The Senate’s version would also impose a 10-percent tax on cosmetic products and other body-enhancement procedures for aesthetic purposes.

The new tax scheme is expected to generate up to P130 billion based on Department of Finance estimates which will be used to fuel the government’s massive infrastructure program.

According to Pimentel, the proposed tax scheme is necessary to raise funds needed for the government’s long-term investments in infrastructure, education and health care.

“Like any investments, we must look beyond the short-term challenges this measure poses and focus on the significant, tangible, and long-term benefits that countless Filipinos today, and in the future, will enjoy,” the Senate chief said.

Based on the Senate-proposed tax reform package, 60 percent of the revenues to be generated will go to infrastructure programs, 27 percent will be channeled to social protection initiatives such as the unconditional cash transfer scheme to the poorest 10 million Filipino families and 13 percent will be used to fund the military’s modernization.

“I thank our colleagues for helping us strike a balance between giving tax relief to our workers and meeting the revenue target so as not to impair the government’s capability to finance its programs and projects,” Angara said.