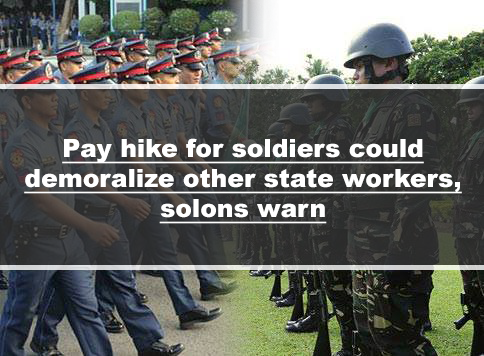 IF HOUSE Resolution No. 18 is signed into law, the salary of soldiers and other uniformed personnel will be doubled.

This will cause distortion in the government salary scale, ACT Teachers Representatives Antonio Tinio and France Castro warned.

In a statement, Tinio and Castro said an estimated 1.2 million civilian employees will be on the losing side because of the wide salary gap between the uniformed personnel and other government personnel with similar qualifications.

“Civilian employees will be left far behind by their armed counterparts although they have similar, even higher qualifications, or have spent equal, even more years in government service,” Tinio said.

Tinio earlier proposed to amend the bill during the deliberations to also include other government employees, but his motion was rejected.

The bill, once signed into law, will take effect in January 2018.

“The 100% increase for Police Officer 1 (PO1) and Private will give them P29,668, almost P10,000 more than the P20,179 to be received under the third tranche of the revised Salary Standardization Law (SSL 4) by a Teacher I, a Nurse I, a Private Secretary, a Registrar I, and a Guidance Counselor I at SG1,” explained Castro.

The solons also noted that the pay adjustment for higher ranking military and uniformed personnel, such as generals, is higher than the salary increase for higher-level civilian positions under SSL4.

The lawmakers said this salary distortion will cause demoralization among civilian personnel.

“President Duterte, DBM and the sponsors of the measure have yet to explain to the hundreds of thousands of rank-and-file government employees the rationale behind the fast-tracking of this unprecedented pay hike for MUP on one hand and the refusal to grant civilian personnel salary increases on the other,”

Castro stressed. Castro clarified that the Makabayan solons are not against salary increases for soldiers and policemen, but since they are not the only ones who will be affected with the impending new taxes, other employees should also be given importance.

“We thus reiterate our call for salary increases for all government employees, both civilian and military and uniformed personnel,” Castro ended. (SunStar Philippines)