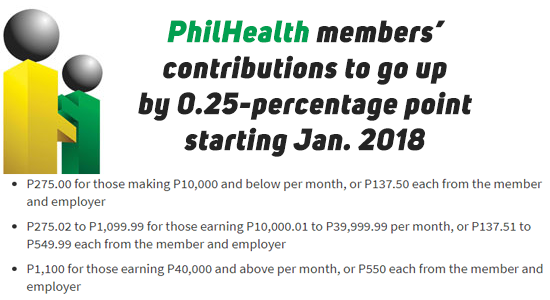 From 2.5-percent contribution rate, member contributions will now be 2.75 percent, computed based on a member’s monthly basic pay, according to PhilHealth Circular 2017-0024, signed last Oct. 11.

Covered by the adjustment are members employed in the formal economy, including kasambahays, family drivers, and sea-based Overseas Filipino Workers, and all employers in the government and private sector.

For a kasambahay or household help, the member’s contribution “shall be shouldered solely by the household employer” in line with the Domestic Workers Act, unless the member is receiving a salary of P5,000 and above in which case he or she would have to pay the proportionate share.

More than a third or P50 billion of the Department of Health’s P165-billion budget for 2018 has been allotted to fund PhilHealth, Duque noted.

PhilHealth has a national coverage of 90 to 92 percent. Most of those not covered by PhilHealth benefits are those in “geographically disadvantaged areas,” or far-flung or remote areas or barangays. — VDS, GMA News