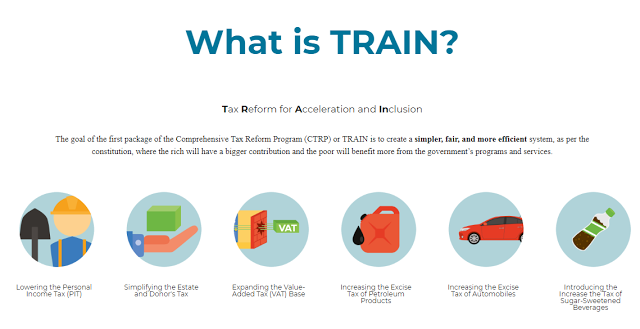 MANILA – – Five items in the first package of tax reform were vetoed by President Rodrigo R. Duterte after noting that if implemented these provisions will be detrimental to the government and would violate existing laws.

Finance Secretary Carlos Dominguez III, in a briefing Friday, said Malacanang will release the copy of the Veto Message but declined to elaborate on the vetoed portions.

“The logic was basically to make it more internally consistent,” he said.

A copy of the Veto Message showed that the first item to be excluded from the measure approved by the Bicameral Conference Committee last December 13 is the reduction of income tax rate of employees of regional headquarters, regional operating headquarters, offshore banking units and petroleum service contractors and subcontractors.

The President, in his message, said he decided to reject Section 6 (F) of the first package of the Bicam-approved tax reform because it violates the Constitution.

“While I understand the laudable objective of the proposal, the provision is violative of the Equal Protection Clause under Section 1, Article III of the 1987 Constitution, as well as the rule of equity and uniformity in the application of the burden of taxation,” he said.

That particular clause estates that “No person shall be deprived of life, liberty, or property without due process of law, nor shall any person be denied the equal protection of the laws.”

The Veto Message explained that this Constitutional provision overrides the consideration “of fairness of the tax system for individuals performing similar work.”

“Given the significant reduction in the personal income tax, the employees of these firms should follow the regular tax rates applicable to other individual taxpayers,” it said.

Next to be vetoed is the zero-rating on sales of goods and services “to separate customs territory and tourism enterprise zones”, which is under Sections 31 and 33 of the enrolled measure.

These parts of the Bicam-approved bill, the Message said, “go against the principle of limiting the VAT (Value Added Tax) zero-rating by direct exporters.”

It explained that “the proliferation of separate customs territories, which include buildings, creates significant leakages in our tax system” and “makes the tax system higher inequitable and significantly reduces the revenues that could be better used for the poor.”

With regards to tourism-related businesses, the Message said “the current law only allows for duty and tax free importation of capital equipment, transportation equipment and other goods.”

“The TIEZA (Tourism Infrastructure and Enterprise Zone Authority) Law explicitly allows only duty and tax free importation of capital equipment, transportation equipment and other goods (in certain cases and always subject to rules provided by the DOF). Thus, this provision actually grants a new incentive to suppliers of registered tourism enterprises,” it said.

Third to be rejected is the exemption from percentage tax of gross sales or receipts amounting not over PHP500,000.

The Message explained that this proposal is disadvantageous to the government “and would lead to abuse and leakages.”

“The subject taxpayers under this provision are already exempted from the VAT, thus, the lower three percent percentage tax on gross sales or gross receipts is considered as their fair share in contributing to the revenue base of the country,” it said.

This proposal, the Message said, “runs the risk of being too general, cover all types of petroleum products, which may be subject to abuse by taxpayers, and thus lead to massive revenue erosion. At any rate, the tax code already identifies which petroleum products can be exempted,” it said.

“The provision will effectively diminish the share of the health sector in the proposed allocation,” it said.

The President said he is “very pleased to sign” the first package of the proposed tax reform law “because of its impact on poor Filipinos.

“This government will do its best to implement this noble objective under the tax reform package while maintaining fiscal discipline and adhering to the true principles of taxation: fair, simple, and efficient,” it added.

The President signed into law the first package of the Tax Reform for Acceleration and Inclusion (TRAIN) measure as well as the proposed 2018 national budget amounting to PHP3.767 trillion into law last December 19.

Among others, the first package of the tax reform measure exempts workers’ first PHP250,000 earnings from being deducted of income tax.

Dominguez said cut of the country’s personal income tax rates is needed to correct inequality and address structural problems of the tax system, which he said, “has become unfair, complex, and inefficient.”

“This tax reform will also raise the revenues needed to make a real positive change to each Filipino’s lives,” he added. (PNA)