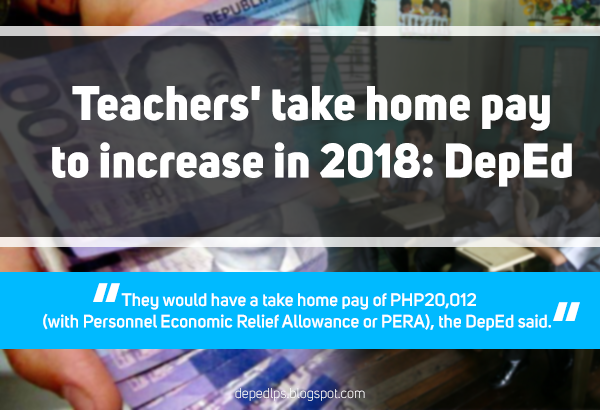 MANILA — The take home pay of teachers will increase this year due to the TRAIN (Tax Reform for Acceleration and Inclusion) Act, plus increases in their allowances, the Department of Education (DepEd) noted Friday.

The TRAIN Act or Republic Act No. 10963 was signed by President Rodrigo Duterte last December to provide income tax cuts to most of the Filipino taxpayers. It is also said to be the first package of the Comprehensive Tax Reform Program.

With the implementation of the TRAIN Act and also the 3rd tranche of the Salary Standardization Law of 2015, DepEd said a Teacher 1 would have a basic salary of PHP20,179.

They would have a take home pay of PHP20,012 (with Personnel Economic Relief Allowance or PERA), the DepEd said.

In a statement, the agency said it supports the administration’s tax reform initiative as this would “significantly develop the country’s human capital”.

DepEd Secretary Leonor Briones has been working on helping teachers get an adequate compensation. Last October 26, she signed DepEd Order (DO) 55, or the “Revised Guidelines on the Implementation of PHP4,000 Net Home Pay for DepEd Personnel”.

The move aims to help teachers manage their finances, after data showed that many of them avail of various loans. DO 55 prioritized deductions for contributions to the GSIS, Home Development Mutual Fund, Bureau of Internal Revenue, and PhilHealth.

Meanwhile, teachers can also look forward to an increase in their allowances. Their clothing allowance, which used to be PHP5,000, would be PHP6,000 this year.

Similarly, their chalk allowance (which they could use to buy chalks and other classroom supplies), would be increased from PHP2,500 to PHP3,500, DepEd said. (PNA)

Statement of DBM Secretary Benjamin Diokno on the issue of increasing...