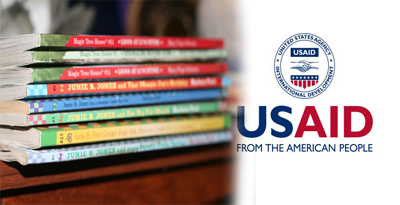 PASIG CITY, December 22, 2017 – The United States Agency for International Development (USAID) officially handed over a total of 1.1 million supplementary books for the Department of Education’s (DepEd) Kindergarten to Grade 3 (K-3) classroom libraries in Regions I (Ilocos) and VII (Central Visayas).

The ceremonial turn-over was held at the Bulwagan ng Karunungan, DepEd Central Office on December 11 as part of the Basa Pilipinas (Read Philippines) — USAID’s flagship basic education activity which supports the Philippines’ goal of improving the reading skills of one million early-grade students.

On behalf of DepEd, Undersecretary for Curriculum and Instruction Lorna Dig-Dino expressed her gratitude to USAID for reaching out to 1.8 million K-3 learners, training 19,000 teachers, and granting eight million pesos’ worth of learning materials to 3,000 public schools.

“This zeroes in on how important reading is, for all the kids and all of us,” she stated.

Undersecretary Dino also shared her hopes that other regions in the country will likewise be given access to the newly turned-over supplementary books, and emphasized that developing reading and comprehension skills are pre-requisites for learning 21st century skills.

US Embassy Deputy Chief of Mission Michael Klecheski also lauded the wonderful partnership they have had with DepEd over the years. They have also been very active in promoting innovation in the Philippines, and in institutionalizing literacy instruction approaches and materials to deepen and sustain gains in reading achievements.

“To have an educated country, we have to have a very educated public,” he said.

Basa Pilipinas
Implemented by the Education Development Center, Basa Pilipinas significantly contributes to DepEd’s goal of making every child a reader by training teachers and school heads on effective reading instruction, producing curriculum-based teaching and learning materials for use in early grade classrooms, and strengthening the capacity of DepEd to effectively implement the language and literacy component of its K to 12 curriculum reforms.

The 1.1 million copies of locally procured supplementary books in English and Filipino and in the mother tongue are intended for 8,137 Grades 2 and 3 classroom libraries in USAID-assisted schools in the two regions. The USAID-provided supplementary reading materials are aimed at enhancing the diversity, range, and quality of children’s literature available to early-grade learners through classroom libraries.

USAID-funded MYDev and EdGE
Aside from Basa Pilipinas, USAID also finances two other projects in support of improving education governance, and manpower and youth development—the Mindanao Youth for Development (MYDev) and the Education Governance Effectiveness (EdGE).

Implemented in select areas in Mindanao, MYDev contributes to improving peace and stability in conflict-affected areas through increased access to education and livelihood training on Basic Education and Life Skills for 19,000 out-of-school youth.

EdGE aims to enhance education governance in select schools, cities and municipalities nationwide. It has trained 6,122 school administrators and officials, and has provided guidance to hundreds of school governing councils and numerous local school boards.